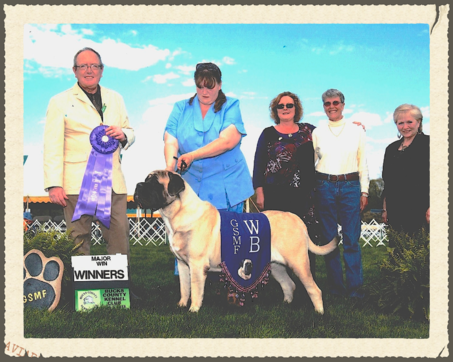 I lost my beloved Finny suddenly on November 5, 2012

to a bowel obstruction caused by an enlarged prostate.

He was almost five years old. 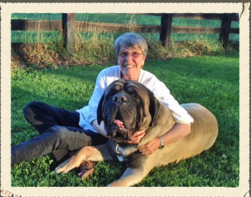 Sired by my Finny, Journey came to us all the way from Australia.  She was blessed to spend her first few months with handler Terry Smith where she learned the finer points of appropriate show dog behavior.  A few months later, she came to live with us... where she quickly unlearned them.  :-(  The first thing Journey did upon arriving at our house was to go lie under the pear tree where her daddy rests.  She has grown to be so like him that I often mistakenly call her "Finn".  Spunky and loving, it's easy to mistake her for Finny and she has become wonderful company for us and our five grandchildren.

Journey is our family dog and was shown only occasionally until the spring of 2015 when she earned 3-point and 5-point majors at the MCOA/Southern States Mastiff Fanciers regional specialty.  At the same show, she earned her CGC and passed her therapy dog test.  A few weeks later, she earned a second 5-point major, taking Winners Bitch at the prestigious Bucks Kennel Club show under judge Rafael Alcrudo from Spain.  Two weeks later, Journey completed her championship at the Virginia Beach Kennel Club show, becoming the first Darkling-bred American champion.  Journey has already made several therapy dog visits and has proven herself to be very sensitive to those with special needs.  She makes us more proud every day and is gradually filling the huge hole left by Finny's loss.

At 24 months, Journey stands ~28.5" at the shoulder and weighs ~165 lbs.  She is muscular and balanced, with thick bone and lovely length of back and Finny's wonderful neck, shoulders and dark mask and ears.  Health testing has been started and all results will be posted on the OFA web site.  Results are also on Journey's Pedigree page.

In her critique of Finny, Australian Judge Janet Brownlee wrote:

​​“Quality balanced fawn dog.  So much to like about this handsome headed dog.  Broad skull with broad deep truncated muzzle.  Well defined stop and well shaped dark eye.  Beautiful black mask with black well shaped and correctly set ears.  Broad deep chest, good length of body and broad through.  Excellent bone.  Broad well muscled hindquarters but needs a tad more turn of stifle.  Lovely Mastiff disposition.  Moved easy but not quite the reach and drive of the BOB.  Another lovely Mastiff.  Well deserved Select Dog and AOM and a pleasure to award.” 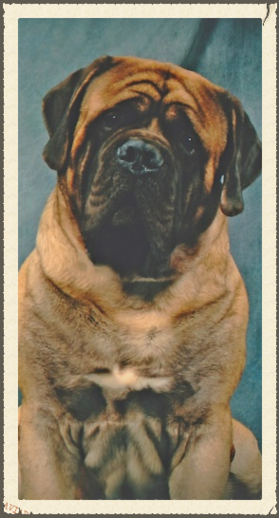 and may not be copied or reproduced without the express written permission of the owner.